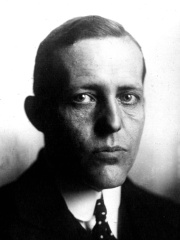 Johann Ludwig "Lutz" Graf Schwerin von Krosigk (Born Johann Ludwig von Krosigk; 22 August 1887 – 4 March 1977) was a German senior government official who served as Minister of Finance of Germany from 1932 to 1945 and de facto Chancellor of Germany in May 1945. A non-partisan conservative, he was appointed to the post by Franz von Papen in 1932. At the request of President Paul von Hindenburg, he continued in that office under Kurt von Schleicher and Adolf Hitler. Read more on Wikipedia

Since 2007, the English Wikipedia page of Lutz Graf Schwerin von Krosigk has received more than 618,359 page views. His biography is available in 44 different languages on Wikipedia making him the 834th most popular politician.

Among POLITICIANS, Lutz Graf Schwerin von Krosigk ranks 834 out of 14,801. Before him are Charles XIII of Sweden, Henry III of England, Sebastian of Portugal, Andrew II of Hungary, John I of Portugal, and Umar II. After him are Ancus Marcius, Gaius Gracchus, Paul of Greece, Shapur I, Temür Khan, and Andronikos II Palaiologos.