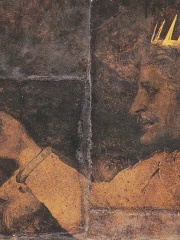 Rehoboam (; Hebrew: רְחַבְעָם‎, Rəḥaḇʿām; Greek: Ροβοάμ, Rovoam; Latin: Roboam, transl. "an enlarged people") was, according to the Hebrew Bible, the last monarch of the United Kingdom of Israel and the first monarch of the Kingdom of Judah after the former's split. He was a son of and the successor to Solomon and a grandson of David. Read more on Wikipedia

Rehoboam is most famous for being the first king of the United Kingdom of Israel and Judah. He was the son of King Solomon and the grandson of King David. He became king of Israel in 930 BC and Judah in 928 BC.

Page views of Rehoboams by language

Among politicians, Rehoboam ranks 539 out of 15,577. Before him are John Hunyadi, Alexander IV of Macedon, Sonia Gandhi, Sergio Mattarella, Anthony Eden, and Theodosius II. After him are Franz von Papen, Ahmose I, Emperor Wu of Han, Gideon, Philip III of France, and Nizam al-Mulk.

Others Deceased in 914 BC