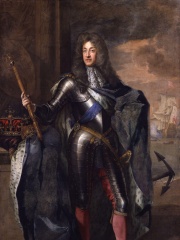 James II and VII (14 October 1633O.S. – 16 September 1701) was King of England and Ireland as James II, and King of Scotland as James VII, from 6 February 1685 until he was deposed in the Glorious Revolution of 1688. He was the last Catholic monarch of England, Scotland and Ireland; his reign is now remembered primarily for struggles over religious tolerance. However, it also involved the principles of absolutism and divine right of kings, and his deposition ended a century of political and civil strife by confirming the primacy of Parliament over the Crown.James inherited the thrones of England, Ireland and Scotland from his elder brother Charles II with widespread support in all three countries, largely based on the principles of divine right or birth. Read more on Wikipedia

Since 2007, the English Wikipedia page of James II of England has received more than 6,306,042 page views. His biography is available in 71 different languages on Wikipedia making him the 455th most popular politician.

Page views of James II of Englands by language

Among politicians, James II of England ranks 451 out of 14,801. Before him are Goliath, Constantius II, Christian VII of Denmark, Tiberius Gracchus, Zhou Enlai, and Honorius. After him are Patrice Lumumba, Sukarno, Mahidevran, Constantius Chlorus, Ptolemy II Philadelphus, and Fulgencio Batista.