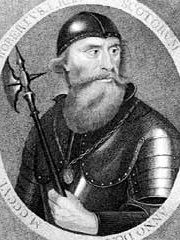 Robert I (11 July 1274 – 7 June 1329), popularly known as Robert the Bruce (Medieval Gaelic: Roibert a Briuis; Modern Scottish Gaelic: Raibeart Brus; Norman French: Robert de Brus or Robert de Bruys; Early Scots: Robert Brus; Latin: Robertus Brussius), was King of Scots from 1306 to his death in 1329. Robert was one of the most famous warriors of his generation and eventually led Scotland during the First War of Scottish Independence against England. He fought successfully during his reign to regain Scotland's place as an independent country and is now revered in Scotland as a national hero. His paternal fourth great-grandfather was King David I. Read more on Wikipedia

Since 2007, the English Wikipedia page of Robert the Bruce has received more than 9,496,830 page views. His biography is available in 59 different languages on Wikipedia making him the 463rd most popular politician.

Page views of Robert the Bruces by language

Among politicians, Robert the Bruce ranks 459 out of 14,801. Before him are Sukarno, Mahidevran, Constantius Chlorus, Ptolemy II Philadelphus, Fulgencio Batista, and Irene of Athens. After him are Lavrentiy Beria, Mustafa IV, Manuel I of Portugal, Louis VIII of France, Mahmoud Abbas, and Menes.