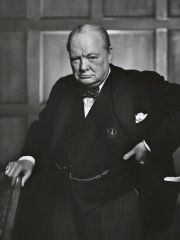 Sir Winston Leonard Spencer Churchill (30 November 1874 – 24 January 1965) was a British statesman, soldier, and writer who served as Prime Minister of the United Kingdom twice, from 1940 to 1945 during the Second World War, and again from 1951 to 1955. Apart from two years between 1922 and 1924, he was a Member of Parliament (MP) from 1900 to 1964 and represented a total of five constituencies. Ideologically an economic liberal and imperialist, he was for most of his career a member of the Conservative Party, which he led from 1940 to 1955. Read more on Wikipedia

Winston Churchill was a British politician who served as Prime Minister of the United Kingdom from 1940 to 1945 and again from 1951 to 1955. Churchill was also an officer in the British Army, a non-academic historian, a writer, and an artist. He won the Nobel Prize in Literature in 1953 for his overall, lifetime body of work.

Among politicians, Winston Churchill ranks 18 out of 15,577. Before him are Vladimir Putin, Suleiman the Magnificent, David, Saladin, Elizabeth I of England, and Jimmy Carter. After him are Constantine the Great, Benito Mussolini, Tutankhamun, Hannibal, Otto von Bismarck, and Hammurabi.