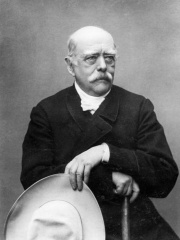 Otto, Prince of Bismarck, Count of Bismarck-Schönhausen, Duke of Lauenburg (German: Otto Fürst von Bismarck, Graf von Bismarck-Schönhausen, Herzog zu Lauenburg, pronounced [ˈɔtoː fɔn ˈbɪsmaʁk] (listen); 1 April 1815 – 30 July 1898), born Otto Eduard Leopold von Bismarck, was a conservative German statesman and diplomat. From his origins in the upper class of Junker landowners, Bismarck rose rapidly in Prussian politics, and from 1862 to 1890 he was the minister president and foreign minister of Prussia. Before his rise to the executive, he was the Prussian ambassador to Russia and France and served in both houses of the Prussian Parliament. Read more on Wikipedia

Otto von Bismarck was the Chancellor of Germany from 1871 to 1890. He is most famous for unifying Germany and establishing the Second Reich.

Among politicians, Otto von Bismarck ranks 23 out of 15,577. Before him are Jimmy Carter, Winston Churchill, Constantine the Great, Benito Mussolini, Tutankhamun, and Hannibal. After him are Hammurabi, Cicero, Mikhail Gorbachev, Attila, Hurrem Sultan, and Mao Zedong.