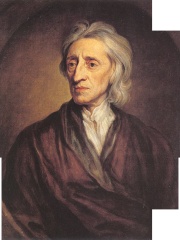 John Locke (; 29 August 1632 – 28 October 1704) was an English philosopher and physician, widely regarded as one of the most influential of Enlightenment thinkers and commonly known as the "Father of Liberalism". Considered one of the first of the British empiricists, following the tradition of Sir Francis Bacon, Locke is equally important to social contract theory. His work greatly affected the development of epistemology and political philosophy. Read more on Wikipedia

John Locke is most famous for his philosophy of empiricism, which states that all knowledge comes from experience.

Among philosophers, John Locke ranks 11 out of 1,081. Before him are Pythagoras, René Descartes, Gautama Buddha, Immanuel Kant, Jean-Jacques Rousseau, and Avicenna. After him are Niccolò Machiavelli, Friedrich Nietzsche, Francis Bacon, Augustine of Hippo, Thales of Miletus, and Thomas Aquinas.