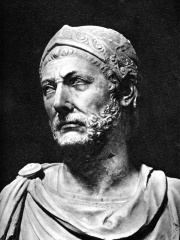 Hannibal (; Punic: 𐤇𐤍𐤁𐤏𐤋, Ḥannibaʿl; 247 – between 183 and 181 BC) was a Carthaginian general and statesman who commanded the forces of Carthage in their battle against the Roman Republic during the Second Punic War. He is widely regarded as one of the greatest military commanders in history. Hannibal's father, Hamilcar Barca, was a leading Carthaginian general during the First Punic War. Read more on Wikipedia

Hannibal is most famous for leading an army of Carthaginian soldiers across the Alps in 218 BC and defeating the Roman army.

Page views of Hannibals by language

Among politicians, Hannibal ranks 22 out of 15,577. Before him are Elizabeth I of England, Jimmy Carter, Winston Churchill, Constantine the Great, Benito Mussolini, and Tutankhamun. After him are Otto von Bismarck, Hammurabi, Cicero, Mikhail Gorbachev, Attila, and Hurrem Sultan.

Others Deceased in 183 BC