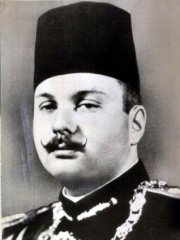 Farouk I (; Arabic: فاروق الأول Fārūq al-Awwal; 11 February 1920 – 18 March 1965) was the tenth ruler of Egypt from the Muhammad Ali dynasty and the penultimate King of Egypt and the Sudan, succeeding his father, Fuad I, in 1936. His full title was "His Majesty Farouk I, by the grace of God, King of Egypt and the Sudan". As king, Farouk was known for his extravagant and playboy lifestyle. Read more on Wikipedia

Farouk was the last king of Egypt and is most famous for being overthrown by a military coup d'état in 1952.

Page views of Farouk of Egypts by language

Among politicians, Farouk of Egypt ranks 717 out of 15,577. Before him are Constantine I of Greece, Henry I of France, Jair Bolsonaro, Peter I of Serbia, Burhanuddin Rabbani, and Mahathir Mohamad. After him are Artemisia I of Caria, Béla IV of Hungary, Hugo Chávez, Maximilian I Joseph of Bavaria, Alexander Lukashenko, and Shunzhi Emperor.