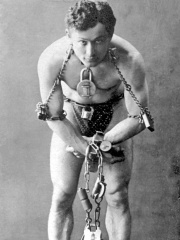 Harry Houdini (; born Erik Weisz; March 24, 1874 – October 31, 1926) was a Hungarian-born American escape artist, illusionist, stunt performer and mysteriarch, noted for his escape acts.He first attracted notice in vaudeville in the United States and then as "Harry 'Handcuff' Houdini" on a tour of Europe, where he challenged police forces to keep him locked up. Soon he extended his repertoire to include chains, ropes slung from skyscrapers, straitjackets under water, and having to escape from and hold his breath inside a sealed milk can with water in it. In 1904, thousands watched as he tried to escape from special handcuffs commissioned by London's Daily Mirror, keeping them in suspense for an hour. Read more on Wikipedia

Harry Houdini was a famous magician and escape artist. He was most famous for his ability to escape from any type of restraint.

Among MAGICIANS In Hungary