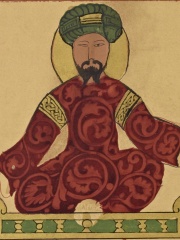 Yusuf ibn Ayyub ibn Shadi (Arabic: يوسف ابن أيوب ابن شاذي, romanized: Yūsuf ibn Ayyūb ibn Shāḏī; c. 1137 – 4 March 1193), better known by his epithet Saladin (Arabic: صلاح الدين, romanized: Ṣalāḥ ad-Dīn, lit. 'Righteous of the Faith'; Kurdish: سه‌لاحه‌دین, romanized: Selahedîn; ) was a Sunni Muslim Kurd who became the first sultan of both Egypt and Syria, and was the founder of the Ayyubid dynasty. Saladin led the Muslim military campaign against the Crusader states in the Levant. He was an important figure in the Third Crusade. Read more on Wikipedia

Since 2007, the English Wikipedia page of Saladin has received more than 8,738,054 page views. His biography is available in 132 different languages on Wikipedia (up from 131 in 2019). Saladin is the 15th most popular politician (down from 13th in 2019), the 2nd most popular biography from Iraq and the most popular Politician.

Saladin was the Sultan of Egypt and Syria in the late 12th century. He is most famous for defeating the Crusaders at the Battle of Hattin in 1187, recapturing Jerusalem and other major cities, and for being a patron of the arts.

Page views of Saladins by language

Among politicians, Saladin ranks 15 out of 15,577. Before him are Augustus, Charlemagne, Mustafa Kemal Atatürk, Vladimir Putin, Suleiman the Magnificent, and David. After him are Elizabeth I of England, Jimmy Carter, Winston Churchill, Constantine the Great, Benito Mussolini, and Tutankhamun.

Among people born in 1138, Saladin ranks 1. After him are Maimonides, Tancred, King of Sicily, Abu Yaqub Yusuf, Casimir II the Just, Hōjō Tokimasa, Giraut de Bornelh, and Conan IV, Duke of Brittany. Among people deceased in 1193, Saladin ranks 1. After him are Balian of Ibelin, Robert IV of Sablé, Roger III of Sicily, Düsum Khyenpa, 1st Karmapa Lama, and Saint Thorlak.