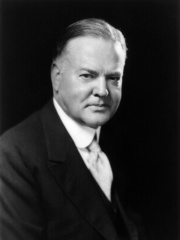 Herbert Clark Hoover (August 10, 1874 – October 20, 1964) was an American engineer, businessman, and politician, who served as the 31st president of the United States from 1929 to 1933. A member of the Republican Party, he held office during the onset of the Great Depression. Before serving as president, Hoover led the Commission for Relief in Belgium, served as the director of the U.S. Food Administration, and served as the third U.S. Read more on Wikipedia

Since 2007, the English Wikipedia page of Herbert Hoover has received more than 8,378,555 page views. His biography is available in 116 different languages on Wikipedia making him the 702nd most popular politician.

Among politicians, Herbert Hoover ranks 697 out of 14,801. Before him are Umberto II of Italy, François Hollande, Gallienus, Christian IX of Denmark, Theresa May, and Sibylla, Queen of Jerusalem. After him are Konstantin von Neurath, Alberto Fujimori, John I of France, Yeongjo of Joseon, Lucius Tarquinius Priscus, and Henry VII, Holy Roman Emperor.