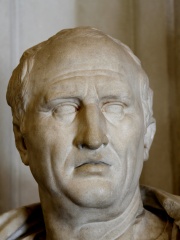 Marcus Tullius Cicero ( SISS-ə-roh; Latin: [ˈmaːr.kʊs ˈtʊl.lʲi.jʊs ˈkɪ.kɛ.roː]; 3 January 106 BC – 7 December 43 BC) was a Roman statesman, lawyer, scholar, philosopher, and academic skeptic, who tried to uphold optimate principles during the political crises that led to the establishment of the Roman Empire. His extensive writings include treatises on rhetoric, philosophy and politics, and he is considered one of Rome's greatest orators and prose stylists. He came from a wealthy municipal family of the Roman equestrian order, and served as consul in 63 BC. His influence on the Latin language was immense. Read more on Wikipedia

Since 2007, the English Wikipedia page of Cicero has received more than 7,849,190 page views. His biography is available in 120 different languages on Wikipedia (up from 113 in 2019). Cicero is the 25th most popular politician, the 16th most popular biography from Italy and the 4th most popular Italian Politician.

Cicero is most famous for his orations in Rome, where he was a lawyer and politician.

Page views of Ciceros by language

Among politicians, Cicero ranks 25 out of 15,577. Before him are Constantine the Great, Benito Mussolini, Tutankhamun, Hannibal, Otto von Bismarck, and Hammurabi. After him are Mikhail Gorbachev, Attila, Hurrem Sultan, Mao Zedong, Queen Victoria, and Commodus.

Others Deceased in 43 BC