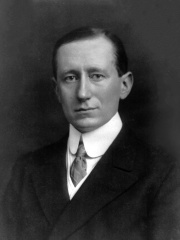 Guglielmo Giovanni Maria Marconi, 1st Marquis of Marconi (Italian: [ɡuʎˈʎɛlmo marˈkoːni]; 25 April 1874 – 20 July 1937) was an Italian inventor and electrical engineer, known for his pioneering work on long-distance radio transmission, development of Marconi's law, and a radio telegraph system. He is credited as the inventor of radio, and he shared the 1909 Nobel Prize in Physics with Karl Ferdinand Braun "in recognition of their contributions to the development of wireless telegraphy".Marconi was also an entrepreneur, businessman, and founder of The Wireless Telegraph & Signal Company in the United Kingdom in 1897 (which became the Marconi Company). Read more on Wikipedia

Since 2007, the English Wikipedia page of Guglielmo Marconi has received more than 2,561,890 page views. His biography is available in 103 different languages on Wikipedia making him the 9th most popular inventor.

Among INVENTORS In Italy