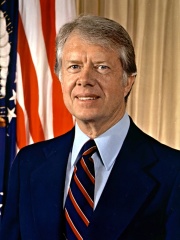 James Earl Carter Jr. (born October 1, 1924) is an American politician and philanthropist who served as the 39th president of the United States from 1977 to 1981. A member of the Democratic Party, he previously served as a Georgia State Senator from 1963 to 1967 and as the 76th governor of Georgia from 1971 to 1975. Read more on Wikipedia

Wnyc.org
Jimmy Carter and 'Desert One'
[REBROADCAST] As an addendum to our Full Bio miniseries on Jimmy Carter, we share an excerpt from our conversation with filmmaker Barbara Kopple about her documentary, “Desert One,” which examines the failed U.S. military operation to rescue hostages in Tehra…
[email protected] (WNYC)
Wnyc.org
'How It Feels To Be Free,' 'MLK/FBI,' Full Bio: Jimmy Carter, 'Desert One'
Director Yoruba Richen joins us to discuss her new documentary for PBS American Masters titled, "How It Feels To Be Free." Based on the book How It Feels To Be Free: Black Women Entertainers and the Civil Rights Movement by Ruth Feldstein, the documentary tel…
[email protected] (WNYC)
Freerepublic.com
Twitter Permanently Bans Trump; Why Do Hillary Clinton, Jimmy Carter, Harry Reid Get a Pass?
Twitter explained why it decided to permanently ban President Donald Trump: "After close review of recent Tweets from the @realDonaldTrump account and the context around them -- specifically how they are being received and interpreted on and off Twitter -- we…
Townhall.com

Among politicians, Jimmy Carter ranks 14 out of 15,710. Before him are Joseph Stalin, Vladimir Lenin, Charlemagne, Mustafa Kemal Atatürk, Elizabeth I of England, and Saladin. After him are Constantine the Great, Attila, Suleiman the Magnificent, Hannibal, Benito Mussolini, and Winston Churchill.