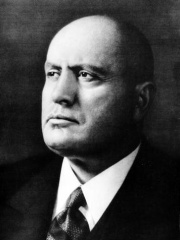 Benito Amilcare Andrea Mussolini (Italian: [beˈniːto aˈmilkare anˈdrɛːa mussoˈliːni]; 29 July 1883 – 28 April 1945) was an Italian politician and journalist who founded and led the National Fascist Party. He was Prime Minister of Italy from the March on Rome in 1922 until his deposition in 1943, and "Duce" of Italian Fascism from the establishment of the Italian Fasces of Combat in 1919 until his execution in 1945 by Italian partisans. Read more on Wikipedia

Benito Mussolini was an Italian fascist dictator who is most famous for his involvement in World War II.

Among politicians, Benito Mussolini ranks 20 out of 15,577. Before him are David, Saladin, Elizabeth I of England, Jimmy Carter, Winston Churchill, and Constantine the Great. After him are Tutankhamun, Hannibal, Otto von Bismarck, Hammurabi, Cicero, and Mikhail Gorbachev.