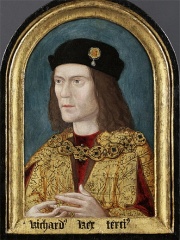 Richard III (2 October 1452 – 22 August 1485) was King of England and Lord of Ireland from 26 June 1483 until his death in 1485. He was the last king of the House of York and the last of the Plantagenet dynasty. His defeat and death at the Battle of Bosworth Field, the last decisive battle of the Wars of the Roses, marked the end of the Middle Ages in England. Richard was created Duke of Gloucester in 1461 after the accession of his brother King Edward IV. Read more on Wikipedia

Richard III of England is most famous for being the last king of the House of York and the last of the Plantagenet dynasty. He was the last English monarch to die in battle, at the Battle of Bosworth Field.

Page views of Richard III of Englands by language

Among politicians, Richard III of England ranks 38 out of 15,577. Before him are Osman I, Abraham Lincoln, Qin Shi Huang, Louis XVI of France, Charles V, Holy Roman Emperor, and Justinian I. After him are Umar, Selim II, Franz Joseph I of Austria, Akhenaten, Pericles, and Maria Theresa.