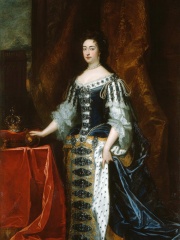 Mary II (30 April 1662 – 28 December 1694) was Queen of England, Scotland, and Ireland, co-reigning with her husband, William III & II, from 1689 until her death in 1694. Mary was the eldest daughter of James, Duke of York, and his first wife Anne Hyde. Mary and her sister Anne were raised as Anglicans at the behest of their uncle, King Charles II, although their parents both converted to Roman Catholicism. Read more on Wikipedia

Mary II of England is most famous for being the joint monarch with her husband, William III, who ruled England, Scotland, and Ireland from 1689 to 1694.

Page views of Mary II of Englands by language

Among politicians, Mary II of England ranks 106 out of 15,577. Before her are Kim Il-sung, Frederick I, Holy Roman Emperor, Pontius Pilate, Mehmed III, Philip IV of France, and Hadrian. After her are Herod the Great, Hermann Göring, Isabella I of Castile, Yasser Arafat, Pepin the Short, and Louis XIII of France.