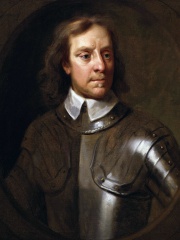 Oliver Cromwell (25 April 1599 – 3 September 1658) was a politician and soldier, widely regarded as one of the most important statesmen in English history. He came to prominence during the 1639 to 1653 Wars of the Three Kingdoms, first as a senior commander in the Parliamentarian army and then as a politician. A leading advocate of the execution of Charles I in January 1649, which led to the establishment of the Commonwealth of England, Scotland and Ireland, he ruled as Lord Protector from December 1653 until his death in September 1658. Read more on Wikipedia

Oliver Cromwell was a British military and political leader who became Lord Protector of the Commonwealth of England, Scotland, and Ireland. He was born into the middle gentry, albeit to a family descended from the sister of King Henry VIII's minister Thomas Cromwell.