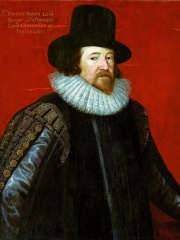 Francis Bacon, 1st Viscount St Alban, (; 22 January 1561 – 9 April 1626), also known as Lord Verulam, was an English philosopher and statesman who served as Attorney General and Lord Chancellor of England. Bacon led the advancement of both natural philosophy and the scientific method and his works remained influential even in the late stages of the Scientific Revolution.Bacon has been called the father of empiricism. He argued for the possibility of scientific knowledge based only upon inductive reasoning and careful observation of events in nature. Read more on Wikipedia

Francis Bacon was a philosopher and scientist who is most famous for his work Novum Organum, which was published in 1620. Bacon's work was an attempt to reform the way that knowledge is gained and used.

Among philosophers, Francis Bacon ranks 14 out of 1,081. Before him are Immanuel Kant, Jean-Jacques Rousseau, Avicenna, John Locke, Niccolò Machiavelli, and Friedrich Nietzsche. After him are Augustine of Hippo, Thales of Miletus, Thomas Aquinas, Georg Wilhelm Friedrich Hegel, Montesquieu, and Thomas Hobbes.