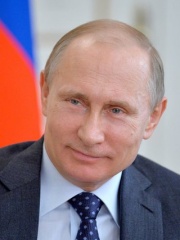 Vladimir Vladimirovich Putin (born 7 October 1952) is a Russian politician and former intelligence officer who has been serving as the president of Russia since 2012, having previously served between 2000 and 2008. He was the prime minister of Russia from 1999 to 2000 and again from 2008 to 2012. Putin worked as a KGB foreign intelligence officer for 16 years, rising to the rank of lieutenant colonel (podpolkovnik), before resigning in 1991 to begin a political career in Saint Petersburg. Read more on Wikipedia

Vladimir Putin is most famous for being the president of Russia and for being a former KGB agent.

Theonion.com
Vladimir Putin Grants Edward Snowden Russian Citizenship
Russian president Vladimir Putin has granted citizenship to Edward Snowden, the former NSA contractor living in exile in Moscow after being charged with espionage in the U.S. for leaking information on American intelligence and mass surveillance programs to t…
The Onion
Independent
Roger Waters pens letter to Vladimir Putin: ‘Stop playing the desperately dangerous game of nuclear chicken’
‘Your invasion of Ukraine took me completely by surprise, it was a heinous war of aggression, provoked or not,’ Waters wrote
Peony Hirwani
Moneycontrol
Vladimir Putin likely to announce accession of occupied regions of Ukraine on September 30, UK says
The referendums currently underway within these territories are scheduled to conclude on September 27, the Defence Ministry said in its daily briefing on Twitter.
Reuters
Newsweek
Edward Snowden Grateful After Vladimir Putin Grants Him Russian Citizenship
Edward Snowden has said being granted Russian citizenship by Vladimir Putin will give him "a little stability."
James Bickerton

Among politicians, Vladimir Putin ranks 12 out of 15,577. Before him are Cleopatra, Vladimir Lenin, Thomas Jefferson, Augustus, Charlemagne, and Mustafa Kemal Atatürk. After him are Suleiman the Magnificent, David, Saladin, Elizabeth I of England, Jimmy Carter, and Winston Churchill.