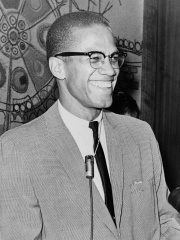 Malcolm X (Malik el-Shabazz, born Malcolm Little; May 19, 1925 – February 21, 1965) was an African-American Muslim minister and human rights activist who was a prominent figure during the civil rights movement. A spokesman for the Nation of Islam until 1964, he was a vocal advocate for black empowerment and the promotion of Islam within the black community. Malcolm spent his adolescence living in a series of foster homes or with relatives after his father's death and his mother's hospitalization. Read more on Wikipedia

Since 2007, the English Wikipedia page of Malcolm X has received more than 27,106,085 page views. His biography is available in 91 different languages on Wikipedia (up from 88 in 2019). Malcolm X is the 4th most popular social activist, the 12th most popular biography from United States (up from 17th in 2019) and the most popular American Social Activist.

Malcolm X is most famous for being a prominent African-American civil rights activist and minister of the Nation of Islam. He was assassinated in 1965 at the age of 39.