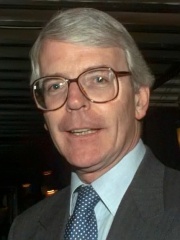 Sir John Major (born 29 March 1943) is a British former politician who served as Prime Minister of the United Kingdom and Leader of the Conservative Party from 1990 to 1997, and as Member of Parliament (MP) for Huntingdon, formerly Huntingdonshire, from 1979 to 2001. Prior to becoming prime minister, he served as Foreign Secretary and Chancellor of the Exchequer in the third Thatcher government. Having left school a day before turning sixteen, Major was elected to Lambeth London Borough Council in 1968, and a decade later to parliament, where he held several junior government positions, including Parliamentary Private Secretary and assistant whip. Read more on Wikipedia

John Major was the Prime Minister of the United Kingdom from 1990 to 1997. He is most famous for his role in the Northern Ireland peace process.