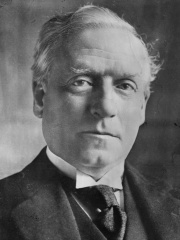 Herbert Henry Asquith, 1st Earl of Oxford and Asquith, (12 September 1852 – 15 February 1928), generally known as H. H. Asquith, was a British statesman and Liberal politician who served as Prime Minister of the United Kingdom from 1908 to 1916. He was the last prime minister to lead a majority Liberal government, and he played a central role in the design and passage of major liberal legislation and a reduction of the power of the House of Lords. In August 1914, Asquith took Great Britain and the British Empire into the First World War. Read more on Wikipedia

Since 2007, the English Wikipedia page of H. H. Asquith has received more than 1,467,917 page views. His biography is available in 57 different languages on Wikipedia making him the 3,798th most popular politician.

Among politicians, H. H. Asquith ranks 3,775 out of 14,801. Before him are Agrippa Postumus, Bagrat III of Georgia, Ptolemy Philadelphus, Dion of Syracuse, Sabine Bergmann-Pohl, and João Manuel, Prince of Portugal. After him are Aleksey Kuropatkin, Aristagoras, Aslan Maskhadov, Blanche of Namur, Emperor Ingyō, and France-Albert René.