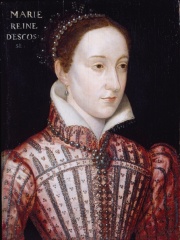 Mary, Queen of Scots (8 December 1542 – 8 February 1587), also known as Mary Stuart or Mary I of Scotland, reigned over Scotland from 14 December 1542 to 24 July 1567. Mary, the only surviving legitimate child of King James V of Scotland, was six days old when her father died and she acceded to the throne. She spent most of her childhood in France while Scotland was ruled by regents, and in 1558, she married the Dauphin of France, Francis. Read more on Wikipedia

Mary, Queen of Scots was a Scottish queen who was beheaded by her cousin, Queen Elizabeth I.

Order-order.com
Sturgeon’s Sister Claims Nicola’s Being Bullied Like Princess Diana and Mary Queen of Scots
Ahead of Sturgeon’s appearance before the Salmond enquiry this morning, Nicola’s sister has been loyally pleading for the First Minister. She accuses those who question her account – or call for her to resign over lying to the Scottish Parliament – of “bullyi…
Christian Calgie

Page views of Mary, Queen of Scots by language

Among politicians, Mary, Queen of Scots ranks 58 out of 15,710. Before her are Trajan, Hammurabi, Henry Kissinger, Akhenaten, Saddam Hussein, and Franz Joseph I of Austria. After her are Nicholas II of Russia, Diocletian, Pontius Pilate, Hurrem Sultan, Benjamin Franklin, and Kim Il-sung.