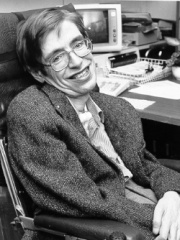 Stephen William Hawking (8 January 1942 – 14 March 2018) was an English theoretical physicist, cosmologist, and author who was director of research at the Centre for Theoretical Cosmology at the University of Cambridge at the time of his death. He was the Lucasian Professor of Mathematics at the University of Cambridge between 1979 and 2009. Hawking's scientific works included a collaboration with Roger Penrose on gravitational singularity theorems in the framework of general relativity and the theoretical prediction that black holes emit radiation, often called Hawking radiation. Read more on Wikipedia

Since 2007, the English Wikipedia page of Stephen Hawking has received more than 50,553,867 page views. His biography is available in 131 different languages on Wikipedia making him the 4th most popular physicist.