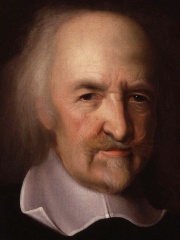 Thomas Hobbes ( HOBZ; 5/15 April 1588 – 4/14 December 1679) was an English philosopher. Hobbes is best known for his 1651 book Leviathan, in which he expounds an influential formulation of social contract theory. In addition to political philosophy, Hobbes contributed to a diverse array of other fields, including history, jurisprudence, geometry, theology, and ethics, as well as philosophy in general. Read more on Wikipedia

Thomas Hobbes is most famous for his political philosophy, which is a form of social contract theory. Hobbes believed that the natural state of humanity is one of war, and that without a strong government to enforce the peace, life would be "solitary, poor, nasty, brutish, and short."

Among philosophers, Thomas Hobbes ranks 20 out of 1,081. Before him are Francis Bacon, Augustine of Hippo, Thales of Miletus, Thomas Aquinas, Georg Wilhelm Friedrich Hegel, and Montesquieu. After him are Democritus, Arthur Schopenhauer, Epicurus, Seneca the Younger, Erasmus, and Auguste Comte.