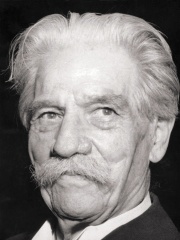 Ludwig Philipp Albert Schweitzer (German: [ˈalbɛʁt ˈʃvaɪ̯t͡sɐ] (listen); 14 January 1875 – 4 September 1965) was an Alsatian polymath. He was a theologian, organist, musicologist, writer, humanitarian, philosopher, and physician. A Lutheran, Schweitzer challenged both the secular view of Jesus as depicted by the historical-critical method current at this time, as well as the traditional Christian view. Read more on Wikipedia

Albert Schweitzer was a German theologian, musician, philosopher, and physician. He studied at the University of Strasbourg and became a medical doctor in 1892. He was awarded the Nobel Peace Prize in 1952 for his philosophy of "reverence for life."

Among physicians, Albert Schweitzer ranks 11 out of 509. Before him are Ignaz Semmelweis, Edward Jenner, Josef Mengele, Robert Koch, L. L. Zamenhof, and Basil of Caesarea. After him are Andreas Vesalius, William Harvey, Muhammad ibn Zakariya al-Razi, Cyril of Alexandria, Cesare Lombroso, and Nestorius.

Among PHYSICIANS In France