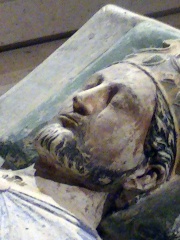 Richard I of England

Richard I (8 September 1157 – 6 April 1199) was King of England from 1189 until his death in 1199. He also ruled as Duke of Normandy, Aquitaine and Gascony, Lord of Cyprus, and Count of Poitiers, Anjou, Maine, and Nantes, and was overlord of Brittany at various times during the same period. He was the third of five sons of King Henry II of England and Eleanor of Aquitaine and seemed unlikely to become king, but all his brothers except the youngest, John, predeceased their father. Read more on Wikipedia

Richard I, also known as Richard the Lionheart, was King of England from 1189 until his death. He was the second monarch of the House of Plantagenet, and he spent much of his reign defending his lands in France.

Page views of Richard I of Englands by language

Among politicians, Richard I of England ranks 70 out of 15,710. Before him are Kim Il-sung, Nebuchadnezzar II, Lorenzo de' Medici, Francisco Franco, Ronald Reagan, and Ivan the Terrible. After him are Nicolae Ceaușescu, Nikita Khrushchev, Frederick I, Holy Roman Emperor, Selim II, Napoleon III, and Franklin D. Roosevelt.