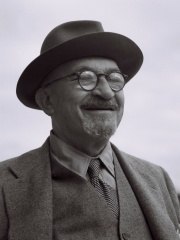 Chaim Azriel Weizmann (Hebrew: חיים עזריאל ויצמן‎ Hayyim Azri'el Vaytsman, Russian: Хаим Вейцман Khaim Veytsman; 27 November 1874 – 9 November 1952) was a Russian-born biochemist, Zionist leader and Israeli statesman who served as president of the Zionist Organization and later as the first president of Israel. He was elected on 16 February 1949, and served until his death in 1952. Read more on Wikipedia

Since 2007, the English Wikipedia page of Chaim Weizmann has received more than 730,909 page views. His biography is available in 55 different languages on Wikipedia making him the 763rd most popular politician.

Among politicians, Chaim Weizmann ranks 758 out of 14,801. Before him are Vlad II Dracul, Aurangzeb, Felix Dzerzhinsky, Françoise-Athénaïs de Rochechouart, Marquise de Montespan, Wilhelm Frick, and Constantine I of Greece. After him are Roger II of Sicily, Romanos IV Diogenes, Maximilian I Joseph of Bavaria, Michael I Rangabe, Conrad II, Holy Roman Emperor, and Philip III of Macedon.