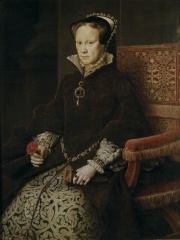 Mary I of England

Mary I (18 February 1516 – 17 November 1558), also known as Mary Tudor, and as "Bloody Mary" by her Protestant opponents, was Queen of England and Ireland from July 1553 until her death in 1558. She is best known for her vigorous attempt to reverse the English Reformation, which had begun during the reign of her father, Henry VIII. Her attempt to restore to the Church the property confiscated in the previous two reigns was largely thwarted by Parliament, but during her five-year reign, Mary had over 280 religious dissenters burned at the stake in the Marian persecutions. Mary was the only child of Henry VIII by his first wife, Catherine of Aragon, to survive to adulthood. Read more on Wikipedia

Mary I of England, also known as "Bloody Mary," was the daughter of King Henry VIII and Catherine of Aragon. She was the first Queen Regnant of England. Her reign was marked by her attempts to restore Roman Catholicism in England.

Page views of Mary I of Englands by language

Among politicians, Mary I of England ranks 68 out of 15,577. Before her are Nicholas II of Russia, Henry Kissinger, John F. Kennedy, Margaret Thatcher, Caligula, and James K. Polk. After her are Hillary Clinton, Huang Xianfan, Muammar Gaddafi, Ronald Reagan, Frederick the Great, and Darius the Great.