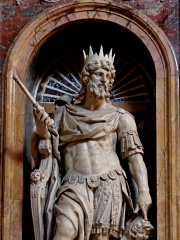 David (; Hebrew: דָּוִד‎, Modern: Davīd, Tiberian: Dāwīḏ, "beloved one") was, according to the Hebrew Bible, the third king of the United Kingdom of Israel. In the Books of Samuel, he is described as a young shepherd and harpist who gains fame by slaying Goliath, a champion of the Philistines, in southern Canaan. David becomes a favourite of Saul, the first king of Israel; he also forges a notably close friendship with Jonathan, a son of Saul. Read more on Wikipedia

David is most famous for being the second king of Israel.

Page views of Davids by language

Among politicians, David ranks 14 out of 15,577. Before him are Thomas Jefferson, Augustus, Charlemagne, Mustafa Kemal Atatürk, Vladimir Putin, and Suleiman the Magnificent. After him are Saladin, Elizabeth I of England, Jimmy Carter, Winston Churchill, Constantine the Great, and Benito Mussolini.