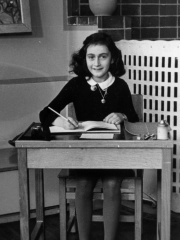 Annelies Marie "Anne" Frank (German: [ˈanə(liːs maˈʁiː) ˈfʁaŋk] (listen), Dutch: [ˌɑnəˈlis maːˈri ˈfrɑŋk, ˈɑnə ˈfrɑŋk] (listen); 12 June 1929 – c. February or March 1945) was a Jewish girl who kept a diary in which she documented life in hiding under Nazi persecution. She is a celebrated diarist who described everyday life from her family hiding place in an Amsterdam attic. One of the most-discussed Jewish victims of the Holocaust, she gained fame posthumously with the 1947 publication of The Diary of a Young Girl (originally Het Achterhuis in Dutch, lit. 'the back house'; English: The Secret Annex), in which she documents her life in hiding from 1942 to 1944, during the German occupation of the Netherlands in World War II. Read more on Wikipedia

Anne Frank is most famous for her diary, which she wrote while she was in hiding with her family from the Nazis during World War II.