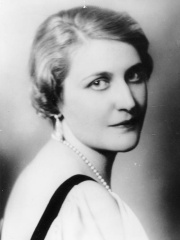 Johanna Maria Magdalena "Magda" Goebbels (née Ritschel; 11 November 1901 – 1 May 1945) was the wife of Nazi Germany's Propaganda Minister Joseph Goebbels. A prominent member of the Nazi Party, she was a close ally, companion, and political supporter of Adolf Hitler. Some historians refer to her as the unofficial "first lady" of Nazi Germany, while others give that title to Emmy Göring.With defeat imminent during the Battle of Berlin at the end of World War II in Europe, she and her husband murdered their six children before committing suicide in the Reich Chancellery gardens. Read more on Wikipedia

Magda Goebbels was the wife of Nazi propaganda minister Joseph Goebbels. She and her husband committed suicide on May 1, 1945, after Adolf Hitler's death.

Among companions, Magda Goebbels ranks 42 out of 673. Before her are Eugénie de Montijo, Maria Theresa of Spain, Livia, Madame du Barry, Catherine Parr, and Zita of Bourbon-Parma. After her are Salman the Persian, Maria Carolina of Austria, Marie Leszczyńska, Désirée Clary, Caroline of Ansbach, and Elizabeth Woodville.