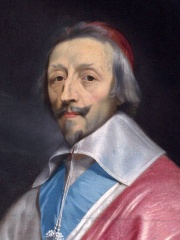 Armand Jean du Plessis, Duke of Richelieu (French pronunciation: ​[aʁmɑ̃ ʒɑ̃ dy plɛsi]; 9 September 1585 – 4 December 1642), commonly referred to as Cardinal Richelieu (UK: , US: ; French: Cardinal de Richelieu [kaʁdinal d(ə) ʁiʃ(ə)ljø] (listen)), was a French clergyman and statesman. He was also known as l'Éminence rouge, or "the Red Eminence", a term derived from the title "Eminence" applied to cardinals, and the red robes they customarily wore. Consecrated as a bishop in 1607, he was appointed Foreign Secretary in 1616. Read more on Wikipedia

Since 2007, the English Wikipedia page of Cardinal Richelieu has received more than 2,024,122 page views. His biography is available in 73 different languages on Wikipedia making him the 112th most popular politician.

Among politicians, Cardinal Richelieu ranks 111 out of 14,801. Before him are Wilhelm II, German Emperor, Osman I, Isabella I of Castile, Xerxes I, Louis XIII of France, and Muammar Gaddafi. After him are Murad I, Claudius, Mehmed III, Hermann Göring, Philip IV of France, and Angela Merkel.