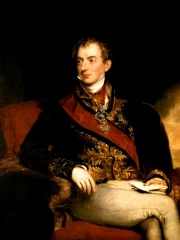 Klemens Wenzel Nepomuk Lothar, Prince of Metternich-Winneburg zu Beilstein (15 May 1773 – 11 June 1859), known as Klemens von Metternich or Prince Metternich, was a conservative Austrian statesman and diplomat who was at the center of the European balance of power known as the Concert of Europe for three decades as the Austrian Empire's foreign minister from 1809 and Chancellor from 1821 until the liberal Revolutions of 1848 forced his resignation. Born into the House of Metternich in 1773 as the son of a diplomat, Metternich received a good education at the universities of Strasbourg and Mainz. Metternich rose through key diplomatic posts, including ambassadorial roles in the Kingdom of Saxony, the Kingdom of Prussia, and especially Napoleonic France. Read more on Wikipedia

Klemens von Metternich was a diplomat and politician who served as the Austrian Empire's Foreign Minister from 1809 to 1848. He is most famous for his work in the Congress of Vienna, which he organized with Tsar Alexander I of Russia, King Frederick William III of Prussia, and Tsar Nicholas I of Russia.

Among politicians, Klemens von Metternich ranks 194 out of 15,577. Before him are Donald Trump, Leonidas I, Jawaharlal Nehru, Louis the Pious, Caracalla, and Salvador Allende. After him are Titus, Edward IV of England, Mohammad Reza Pahlavi, Pargalı Ibrahim Pasha, Al Gore, and Louis Philippe I.