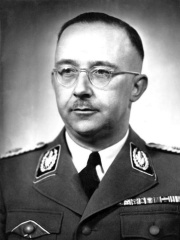 Heinrich Luitpold Himmler (German: [ˈhaɪnʁɪç ˈluːɪtˌpɔlt ˈhɪmlɐ] (listen); 7 October 1900 – 23 May 1945) was Reichsführer of the Schutzstaffel (Protection Squadron; SS), and a leading member of the Nazi Party of Germany. Himmler was one of the most powerful men in Nazi Germany and a main architect of the Holocaust. As a member of a reserve battalion during World War I, Himmler did not see active service, and did not fight. Read more on Wikipedia

Heinrich Himmler was the head of the SS and Gestapo, and he is most famous for being in charge of the Holocaust.

Among politicians, Heinrich Himmler ranks 90 out of 15,577. Before him are Trajan, Nicolae Ceaușescu, Kösem Sultan, Francisco Franco, Philip II of Spain, and George Washington. After him are Leonid Brezhnev, Louis XV of France, Giuseppe Garibaldi, Henry IV of France, Wilhelm II, German Emperor, and Murad IV.