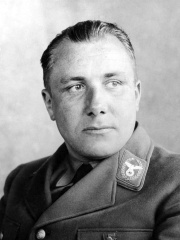 Martin Ludwig Bormann (17 June 1900 – 2 May 1945) was a German Nazi Party official and head of the Nazi Party Chancellery. He gained immense power by using his position as Adolf Hitler's private secretary to control the flow of information and access to Hitler. He used his position to create an extensive bureaucracy and involve himself as much as possible in the decision making. Read more on Wikipedia

Martin Bormann is most famous for being the Nazi Party's private secretary and Hitler's personal secretary.

Among politicians, Martin Bormann ranks 264 out of 15,710. Before him are Ariel Sharon, Yuri Andropov, Theodore Roosevelt, Yitzhak Rabin, Charles XII of Sweden, and Beatrix of the Netherlands. After him are Cleisthenes, George IV of the United Kingdom, Philippe Pétain, Babur, Louis XVII of France, and Matthias Corvinus.