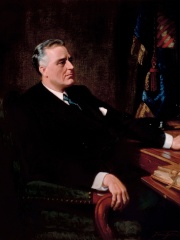 Franklin Delano Roosevelt ( DEL-ə-noh ROH-zə-velt, -⁠vəlt; January 30, 1882 – April 12, 1945), often referred to by his initials FDR, was an American politician and lawyer who served as the 32nd president of the United States from 1933 until his death in 1945. As the leader of the Democratic Party, he won a record four presidential elections and became a central figure in world events during the first half of the 20th century. Roosevelt directed the federal government during most of the Great Depression, implementing his New Deal domestic agenda in response to the worst economic crisis in U.S. history. Read more on Wikipedia

Franklin D. Roosevelt was the 32nd president of the United States, serving from 1933 to 1945. He was elected four times and is the only president in American history to be elected to more than two terms. He led the United States through the Great Depression and World War II.

Among politicians, Franklin D. Roosevelt ranks 49 out of 15,577. Before him are Pericles, Maria Theresa, Ulysses S. Grant, Nero, Leon Trotsky, and Peter the Great. After him are Angela Merkel, Saddam Hussein, Boris Yeltsin, Nebuchadnezzar II, Nikita Khrushchev, and Marcus Aurelius.