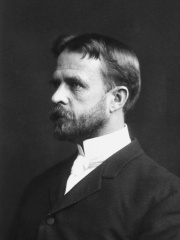 Thomas Hunt Morgan (September 25, 1866 – December 4, 1945) was an American evolutionary biologist, geneticist, embryologist, and science author who won the Nobel Prize in Physiology or Medicine in 1933 for discoveries elucidating the role that the chromosome plays in heredity.Morgan received his Ph.D. from Johns Hopkins University in zoology in 1890 and researched embryology during his tenure at Bryn Mawr. Following the rediscovery of Mendelian inheritance in 1900, Morgan began to study the genetic characteristics of the fruit fly Drosophila melanogaster. In his famous Fly Room at Columbia University's Schermerhorn Hall, Morgan demonstrated that genes are carried on chromosomes and are the mechanical basis of heredity. Read more on Wikipedia

Thomas Hunt Morgan is most famous for his work with Drosophila, a type of fruit fly.