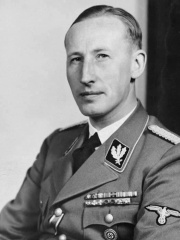 Reinhard Tristan Eugen Heydrich (; German: [ˈʁaɪnhaʁt ˈtʁɪstan ˈɔʏɡn̩ ˈhaɪdʁɪç] (listen); 7 March 1904 – 4 June 1942) was a high-ranking German SS and police official during the Nazi era and a principal architect of the Holocaust. He was chief of the Reich Security Main Office (including the Gestapo, Kripo, and SD). He was also Stellvertretender Reichsprotektor (Deputy/Acting Reich-Protector) of Bohemia and Moravia. Read more on Wikipedia

Reinhard Heydrich was the chief of the SS and one of the main architects of the Holocaust.

Among politicians, Reinhard Heydrich ranks 166 out of 15,710. Before him are Cyrus the Great, Joanna of Castile, Mohammad Reza Pahlavi, Mustafa I, Leonidas I, and Titus. After him are George W. Bush, Murad II, Mehmed IV, Maximilien Robespierre, Klemens von Metternich, and Harry S. Truman.