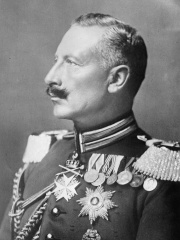 Wilhelm II (Friedrich Wilhelm Viktor Albert; 27 January 1859 – 4 June 1941) was the last German Emperor (German: Kaiser) and King of Prussia, reigning from 15 June 1888 until his abdication on 9 November 1918. Despite strengthening the German Empire's position as a great power by building a powerful navy, his tactless public statements and erratic foreign policy greatly antagonized the international community and are considered by many to be one of the underlying causes of World War I. When the German war effort collapsed after a series of crushing defeats on the Western Front in 1918, he was forced to abdicate, thereby marking the end of the German Empire and the House of Hohenzollern's 300-year reign in Prussia and 500-year reign in Brandenburg. Wilhelm II was the son of Prince Frederick William of Prussia and Victoria, German Empress Consort. Read more on Wikipedia

Among politicians, Wilhelm II, German Emperor ranks 95 out of 15,577. Before him are George Washington, Heinrich Himmler, Leonid Brezhnev, Louis XV of France, Giuseppe Garibaldi, and Henry IV of France. After him are Murad IV, Uthman, Mary, Queen of Scots, Theodosius I, Kim Il-sung, and Frederick I, Holy Roman Emperor.