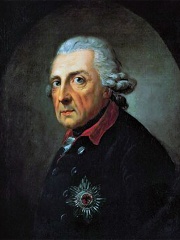 Frederick II (German: Friedrich II.; 24 January 1712 – 17 August 1786) was King in Prussia from 1740 until 1772, and King of Prussia from 1772 until his death in 1786. His most significant accomplishments include his military successes in the Silesian wars, his re-organisation of the Prussian Army, the First Partition of Poland, and his patronage of the arts and the Enlightenment. Frederick was the last Hohenzollern monarch titled King in Prussia and declared himself King of Prussia after annexing Polish Prussia from the Polish–Lithuanian Commonwealth in 1772. Read more on Wikipedia

Frederick the Great was a Prussian king who is most famous for his military and diplomatic achievements.

Page views of Frederick the Greats by language

Among politicians, Frederick the Great ranks 73 out of 15,577. Before him are James K. Polk, Mary I of England, Hillary Clinton, Huang Xianfan, Muammar Gaddafi, and Ronald Reagan. After him are Darius the Great, Murad III, Ivan the Terrible, Richard I of England, Napoleon III, and Rama.