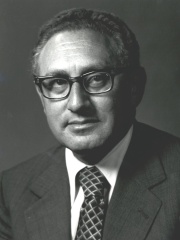 Henry Alfred Kissinger (; German: [ˈkɪsɪŋɐ]; born Heinz Alfred Kissinger, May 27, 1923) is a German-born American politician, diplomat, and geopolitical consultant who served as United States Secretary of State and National Security Advisor under the presidential administrations of Richard Nixon and Gerald Ford. A Jewish refugee who fled Nazi Germany with his family in 1938, he became National Security Advisor in 1969 and U.S. Secretary of State in 1973. For his actions negotiating a ceasefire in Vietnam, Kissinger received the 1973 Nobel Peace Prize under controversial circumstances, with two members of the committee resigning in protest.A practitioner of Realpolitik, Kissinger played a prominent role in United States foreign policy between 1969 and 1977. Read more on Wikipedia

Henry Kissinger is a German-born American diplomat who served as the Secretary of State under President Richard Nixon. He is most famous for his role in the Vietnam War, which he helped to end by negotiating the 1973 Paris Peace Accords.

Among politicians, Henry Kissinger ranks 63 out of 15,577. Before him are Ahmed I, Martin Van Buren, Josip Broz Tito, Benjamin Franklin, Mehmed the Conqueror, and Nicholas II of Russia. After him are John F. Kennedy, Margaret Thatcher, Caligula, James K. Polk, Mary I of England, and Hillary Clinton.