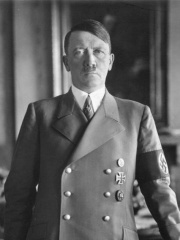 Adolf Hitler (German: [ˈadɔlf ˈhɪtlɐ] (listen); 20 April 1889 – 30 April 1945) was an Austrian-born German politician who was dictator of Germany from 1933 until his death in 1945. He rose to power as the leader of the Nazi Party, becoming the chancellor in 1933 and then taking the title of Führer und Reichskanzler in 1934. During his dictatorship, he initiated World War II in Europe by invading Poland on 1 September 1939. Read more on Wikipedia

Adolf Hitler was a German politician who was the leader of the Nazi Party and dictator of Nazi Germany from 1933 to 1945. He initiated World War II in Europe with the invasion of Poland in September 1939, and was a central figure of the Holocaust.

Among politicians, Adolf Hitler ranks 2 out of 15,577. Before him are Napoleon. After him are Julius Caesar, Louis XIV of France, Joseph Stalin, Cleopatra, Vladimir Lenin, Thomas Jefferson, Augustus, Charlemagne, Mustafa Kemal Atatürk, and Vladimir Putin.