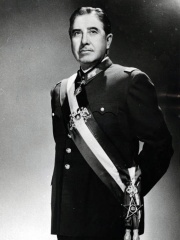 Augusto José Ramón Pinochet Ugarte (, also US: , UK: , Spanish: [awˈɣusto pinoˈ(t)ʃe(t)]; 25 November 1915 – 10 December 2006) was a Chilean Army General, politician and military dictator who ruled Chile from 1973 to 1990, first as the leader of the Military Junta of Chile from 1973 to 1981, being self-declared President of the Republic by the junta in 1974 and becoming the de facto dictator of Chile, and after from 1981 to 1990 as de jure President after a new Constitution, which confirmed him in the office, was approved by a referendum in 1980.Augusto Pinochet rose through the ranks of the Chilean Army to become General Chief of Staff in early 1972 before being appointed its Commander-in-Chief on 23 August 1973 by President Salvador Allende. On 11 September 1973, Pinochet seized power in Chile in a coup d'état, with the support of the U.S., that toppled Allende's democratically elected Unidad Popular government and ended civilian rule. In December 1974, the ruling military junta appointed Pinochet Supreme Head of the nation by joint decree, although without the support of one of the coup's instigators, Air Force General Gustavo Leigh. Read more on Wikipedia

Augusto Pinochet is most famous for being the military dictator of Chile from 1973 to 1990.

Among politicians, Augusto Pinochet ranks 149 out of 15,710. Before him are Paul von Hindenburg, Bayezid II, Hosni Mubarak, Abdul Hamid II, Louis the Pious, and Francis I of France. After him are Murad I, Caracalla, Joseph Goebbels, Oliver Cromwell, Pol Pot, and Henry III of France.