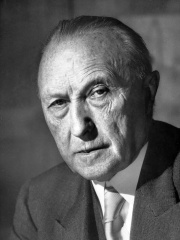 Konrad Hermann Joseph Adenauer (German: [ˈkɔnʁaːt ˈʔaːdənaʊɐ] (listen); 5 January 1876 – 19 April 1967) was a German statesman who served as the first Chancellor of the Federal Republic of Germany (West Germany) from 1949 to 1963. He was co-founder and first leader of the Christian Democratic Union (CDU) (until 1966), a Christian Democratic party that under his leadership became one of the most influential parties in the country. In the early years of the Federal Republic he switched focus from denazification to recovery and led his country from the ruins of World War II to becoming a productive and prosperous nation that forged close relations with France, the United Kingdom and the United States. Read more on Wikipedia

Among politicians, Konrad Adenauer ranks 238 out of 15,710. Before him are Mahmud II, Lech Wałęsa, Sulla, Joe Biden, Olof Palme, and Nicholas I of Russia. After him are Mehmed I, Philip II of France, Charles the Bald, Enver Hoxha, Louis XII of France, and Alexander III of Russia.