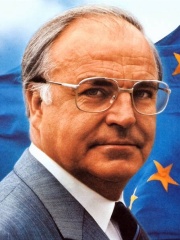 Helmut Josef Michael Kohl (German pronunciation: [ˈhɛlmuːt ˈkoːl] (listen); 3 April 1930 – 16 June 2017) was a German politician who served as Chancellor of Germany from 1982 to 1998 and Leader of the Christian Democratic Union (CDU) from 1973 to 1998. Kohl's 16-year tenure is the longest of any German chancellor since Otto von Bismarck, and oversaw the end of the Cold War, the German reunification and the creation of the European Union (EU). Read more on Wikipedia

Helmut Kohl was a German politician who served as Chancellor of West Germany from 1982 to 1990 and as the chairman of the Christian Democratic Union from 1973 to 1998. He is best known for his reunification of Germany in 1990.

Among politicians, Helmut Kohl ranks 247 out of 15,577. Before him are Enver Hoxha, Emperor Meiji, Georgy Zhukov, James VI and I, Şehzade Bayezid, and Woodrow Wilson. After him are Henry II of France, Philip V of Spain, António de Oliveira Salazar, Hu Jintao, Francis I, Holy Roman Emperor, and Charles XII of Sweden.