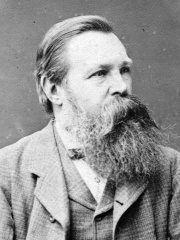 Friedrich Engels ( ENG-(g)əlz, German: [ˈfʁiːdʁɪç ˈʔɛŋl̩s]), sometimes anglicised as Frederick Engels (28 November 1820 – 5 August 1895), was a German philosopher, critic of political economy, historian, political theorist and revolutionary socialist. He was also a businessman, journalist and political activist, whose father was an owner of large textile factories in Salford (Lancashire, England) and Barmen, Prussia (now Wuppertal, Germany).Engels developed what is now known as Marxism together with Karl Marx. In 1845, he published The Condition of the Working Class in England, based on personal observations and research in English cities. Read more on Wikipedia

Friedrich Engels is most famous for co-writing the Communist Manifesto with Karl Marx.

Among philosophers, Friedrich Engels ranks 27 out of 1,081. Before him are Democritus, Arthur Schopenhauer, Epicurus, Seneca the Younger, Erasmus, and Auguste Comte. After him are Averroes, Heraclitus, Parmenides, Baruch Spinoza, Martin Heidegger, and Anaximander.