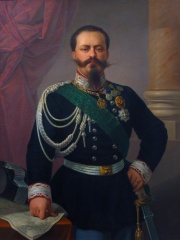 Victor Emmanuel II (Italian: Vittorio Emanuele II; full name: Vittorio Emanuele Maria Alberto Eugenio Ferdinando Tommaso di Savoia; 14 March 1820 – 9 January 1878) was King of Sardinia from 1849 until 17 March 1861, when he assumed the title of King of Italy and became the first king of an independent, united Italy since the 6th century, a title he held until his death in 1878. Borrowing from the old Latin title Pater Patriae of the Roman emperors, the Italians gave him the epithet of Father of the Fatherland (Italian: Padre della Patria). Born in Turin as the eldest son of Charles Albert, Prince of Carignano, and Maria Theresa of Austria, he fought in the First Italian War of Independence (1848–1849) before being made King of Piedmont-Sardinia following his father's abdication. Read more on Wikipedia

Victor Emmanuel II of Italy was most famous for being the first king of Italy. He was the son of King Charles Albert of Sardinia and Maria Theresa of Austria. He became King of Sardinia in 1849 and King of Italy in 1861.

Page views of Victor Emmanuel II of Italies by language

Among politicians, Victor Emmanuel II of Italy ranks 299 out of 15,577. Before him are Ahmed III, Beatrix of the Netherlands, Hamid Karzai, Djoser, Francis II, Holy Roman Emperor, and Scipio Africanus. After him are Cardinal Mazarin, Raúl Castro, Sulla, Hugh Capet, Jacques Chirac, and Croesus.